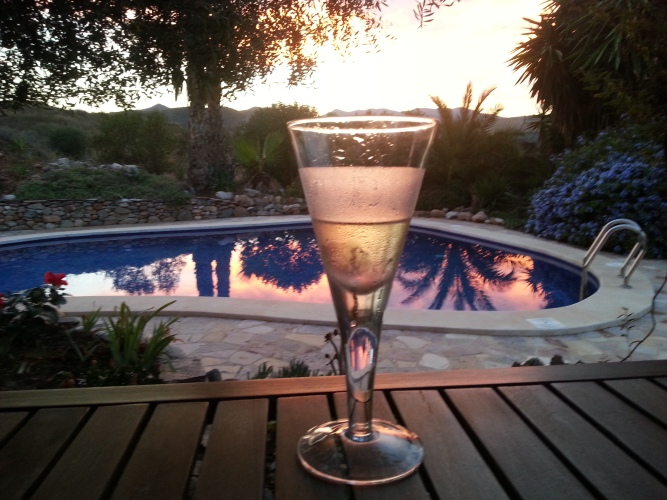 From UK slog to chilled-out blog

The funny thing about dreams is that sometimes they are just that, dreams.

We had a dream to retire to Spain in the sun and where we would get more bang for our buck. So, we bought a beautiful cortijo and off we went! It was pretty idyllic and we were lucky to meet some fantastic people who have become good friends. We’ve had so many funny Spanish adventures as recorded in this blog and throughout that time Brexit was never in our sights until it happened and uncertainty crept into our lives and we decided to sell our house. We sold it within six months after expecting it to take at least a year and then rented an apartment on a golf complex until the Brexit situation became clearer but it still hasn’t!

And now 2020 is happening, a year none of us will ever forget. Many people’s plans and dreams put on hold or changed. Are we still planning to buy another property in Spain, may be? When we told friends of our big decision to go back to England, one of them pointed out to us that “you don’t have the same dream every night and so why shouldn’t you have a different dream!” So, here we are, currently back in England and feeling sometimes a little like Spain was just that, a dream.

We’ve moved back into our apartment which is in a lovely setting by the river Thames in Chertsey, Surrey. After years of having our property rented out, we now have repairs and decorating to keep us busy and from missing our Spanish lifestyle. Soon we will be ready to sell it fingers crossed etc etc in these weird times and buy our next house!

Meanwhile, we also have ‘project Charlie’ our nervous German Shepherd dog! His whole little life has been turned upside down, difficult for normal dogs, let alone Charlie. He has left behind his girlfriend, Aura, his neighbours, Ellie, Brando and Saba and his training classes. He’s left behind sunny warm walks, beach walks in the winter sun and generally a chilled dog’s life! I sometimes wish he could tell us what he thinks now seeing lots of people (his biggest fear), loads of traffic (he hates cars), even more cyclists and joggers (on a good day he’ll ignore!), rain, muddy paws and no garden. Thank goodness, just a two minute walk away are open fields where he can run and chase sticks, not that he ever brings them back!

All this is on top of a boring nine hour drive and overnight stay in Santander before catching the ferry!

Right now, I feel a bit like a foreigner in my own country, to be honest. Setting up utility accounts and new internet supplier (2 week wait!) has assured 100% frustration levels! I’ve been on intimate terms with automated robots who “would like to direct my call to the right person” or on a couple of occasions to a person who mimics a robot and has no common sense! The recorded message from one company apologised in advance for any background noise involving children, animals and clinking of tea cups ” in these difficult times while staff work from home” What I do know, is that overall these companies aim is to get the customer to do everything (their job?) online. But with internet access only on our mobiles it has made me feel like an uneducated tech alien with very fat fingers on a small keypad completing endless forms! Hey, I wasn’t going to be defeated and nor was Steve, who outsmarted our two-month old Samsung Smart TV which thought it was still in Spain for a few days!

However, the runner up, yes only the runner up, in my tech frustration charts is the Health Centre. After one hour, one green tea and one strong coffee, I completed both our registration forms which gave a link to an NHS app so we could make appointments online. Great and I downloaded the app on our mobiles and booked a video appointment for Steve later in the day. Guess what ….. it didn’t happen. So, I called the Health Centre and the NHS app isn’t actually linked to them! You couldn’t make it up but all was resolved with a good old fashion telephone conversation.

Well, I was all ready to publish this post as we had gone live with WI-FI and then Saturday happened. So, the winner of my frustration charts is my dear friend Alexa Echo. Steve reluctantly unpacked her, he just doesn’t see the need for this gadget, a waste of time and money! Anyway, I amended the app details with new UK phone number ….. Hello Alexa! She replied Hola! and continued in her perfect Spanish to tell me she couldn’t connect to the WI-FI. That’s probably as she thought she was still in Spain with the TV! One and a half hours on the phone to the Amazon Alexa helpdesk, explaining the problem to four different people and Alexa simply refusing to give up her Spanish, they finally sorted the problem. Now we happily say good morning to each other in English!

Our 14-day quarantine has now finished, so, our English adventure can really start!!!

Chilled at Sunset in Chertsey

8 thoughts on “Reflection on a Dream”

Leave a Reply to Steve and Carole Cancel reply

We spent the best Sunday morning catching up with these gorgeous VIP little people!💙💖💙💖 Fireman Sam....Arlo and darling Ottilie. Plus their mum our God daughter Rosie and bestie Dee😍. A couple of hours after this photo it snowed🤪.....only in England...lol🤣🤣#Sunday #morningcoffee #playtime
My arty farty morning💖 Miss my classes at #BedarArtCentre #Almeria #Spain Not quite the same in a very chilly #Chertsey 🤣🤣🤣
Charlie's new best friends...Rosie and Dee!!!💖💖🐕🤗
#chilledatsunset.com