The changeable ‘lockdown’ weather we had for a good few weeks really helped Colin’s plot although it was a bit unkind to some of the newly planted fruit trees.

An absolute abundance of potatoes, leeks, cauliflower, onions etc….. And as I type, Colin is busy planting out more of his seedlings. 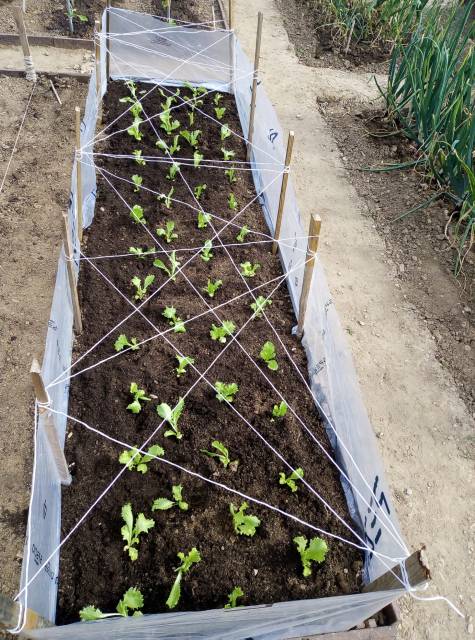 Planting the courgettes attracted some friends! 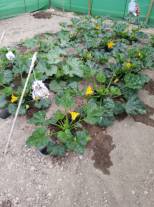 As we approach phase two easing of Spain’s lockdown measures, I can’t wait until we are allowed to meet up, as last time we got together, Colin gave us a bag of goodies! Recently courgettes,  strawberries and eggs have been added to Colin and Steve’s menus. Yes, eggs, so that was Colin’s next project he hinted at, in my post Basket Case in Jauro (February)

I asked Colin how this latest project came about? He said that developing the plots was always on their dream Spanish lifestyle ‘to do’ list but with the major renovations on the house plus their beach apartments it couldn’t be a priority. Fast forward several years, and an action plan was spurred on due to their neighbour Sofia subtle words in Colin’s ear about how some of the other neighbours were complaining that the weeds from the two plots were seeding on the neighbours plots!

Colin said that after they cleared the land, the plots looked so much larger than they first thought. Jokingly, Colin suggested to Steve they should keep some chickens and Colin already had a design in mind. A few weeks went by and Steve said if Colin drew up the plans he would build it. On discussing keeping hens with neighbours, there were lots of arm waving and warnings for Colin about foxes, wolves, wild cats and the village dogs! Also, beware of eagles and hawks, so a strong fenced run with a covering to stop predators getting to the hens was added to Colin’s design.

The good thing about Steve’s mancave was that he had lots of bits of timber laying around. An advert on Facebook resulted in 6 lengths of 6in x 4in and a small wooden window! These posts were cemented into the ground, and this set the villagers tongues wagging and funny how they then started going by the plots on their walks, pausing to stop and point, trying to work out what was going on? 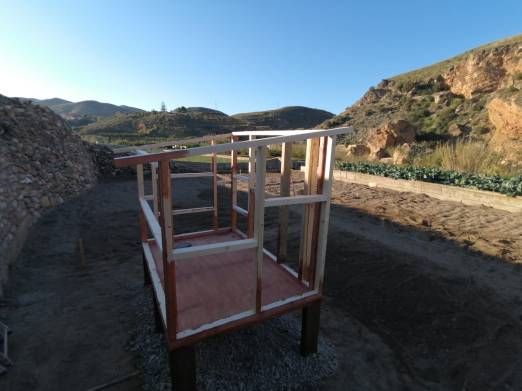 The floor of the hen house was constructed on site in a morning and the side panels constructed and put up the same afternoon. The roofing being a sheet of marine plywood was put up just before sunset. On the second day the upcycled wooden window was fitted and doors put on. 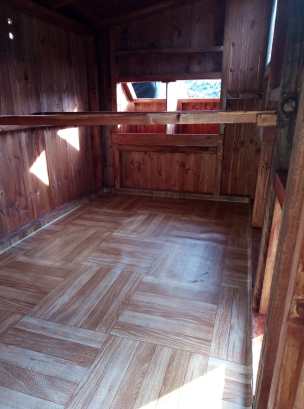 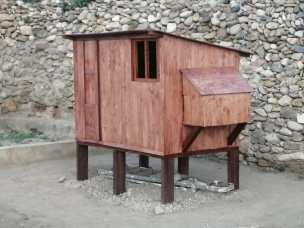 Then the wood was stained and vinyl floor went in and that completed another long, mostly fun day! Egg laying boxes were connected at one end. 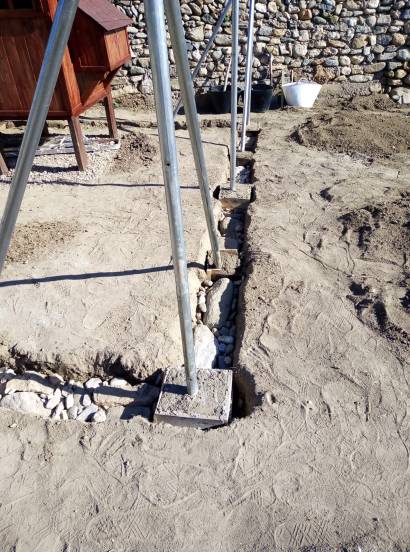 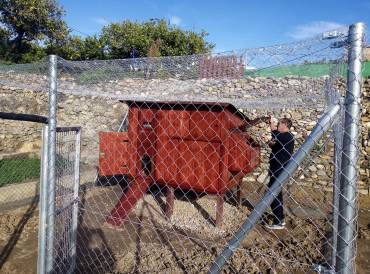 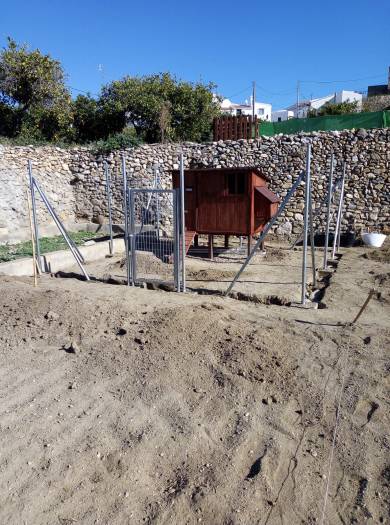 Next, support posts were cemented into the boundary for the run and left to set overnight. A boundary fence on the chicken run was cemented two foot underground so predators couldn’t dig under the fence and get in. The door was fitted with padlock and wire topping complete with a solar security light in place. Finally, finishing touches with curtains over the egg nesting boxes for privacy …. and pretty curtains up at the window! Cosy and safe! In total it was five days work at a cost  of 275 euros on materials and  after just fifteen minutes drawing up the plans. It’s super stylish and I am sure there is a business venture there for Steve offering  2 bespoke coup styles, the large model ‘Rural Jauro‘ and the smaller model ‘Urban Antas‘ …..LOL! 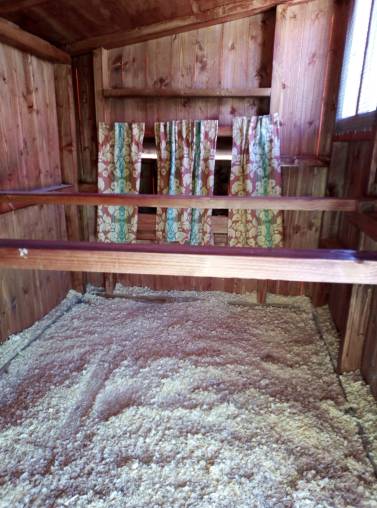 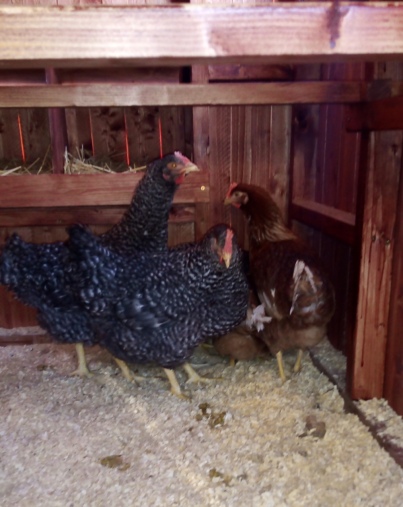 Last but not least Colin spent another 36 euros and enter the girls ….. Meryl, Beryl, Cheryl (grey hens) and Molly, Lolly and Dolly (orange brown hens). And no surprises they are very happily settled in their bespoke hand built hen coup. 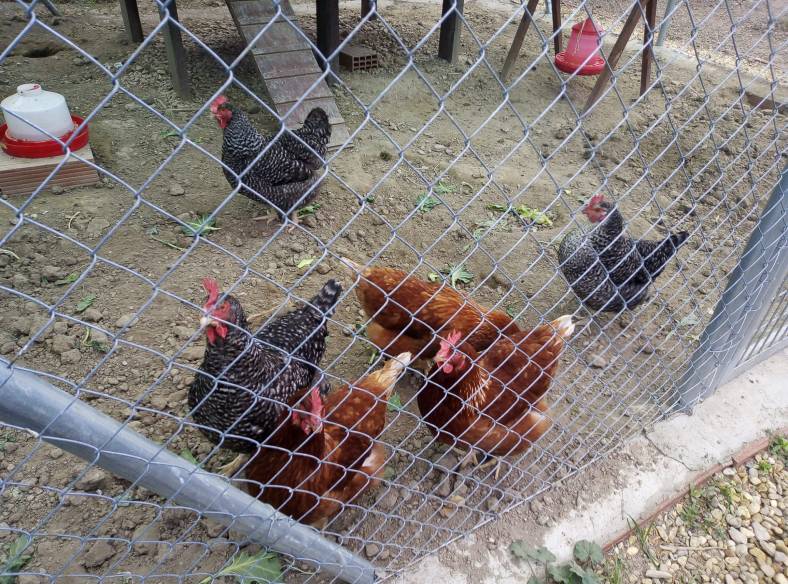 They started laying eggs after a week and totalled 6 a day after a few weeks. Meryl lays double yolk eggs and several huge eggs which have triple yolks!

Colin told me at night he always makes sure the hens are locked in, much to the delight of his neighbour Juan who always says to Colin as he walks by “todos los niños en la cama” (all the children in bed). Colins replies “si, y buenas noches besado!” (yes and kissed goodnight!) Juan gives the biggest toothless grin!

As for me, I hope to be back out soon and sharing this lovely part of Spain I live in!

Meanwhile , here’s a video of Colin’s home seed production with the most beautiful views!