It never ceases to amaze me how people become part of your life. With Colin and Steve they became the font of knowledge, our Wikipedia de España. We were introduced to them by our Belgium friends Georges and Jeannine when my Steve was desperate to find a sports therapist to help with a sciatic problem he had. Ray solved the problem in a matter of weeks and my Steve was eternally grateful to them for their help. Fast forward four years and we are now firm friends!

Colin and Steve moved to a small pueblo in the hills called Jauro near Antas in 2006 after buying one house. Two years later they bought the house next door as well. They did the majority of the renovations themselves and completed most of the combined houses in 2012. The pool, terraces and garden were completed in 2013 and finally the front courtyard in 2015. They have maintained the Spanish character and furnished their home in a traditional Spanish manor. 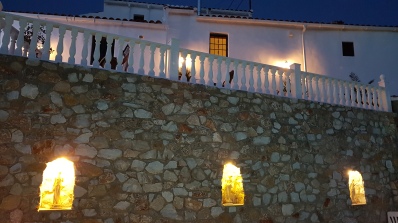 Colin and Steve have two plots of land of 800m2 and last September Steve decided Colin needed a new challenge. Idle hands and all that, so they set about clearing plot one and readying it for planting. This involved weeding, digging and rotovating. No easy task as the ground here in Almeria is rock hard. Colin already had a vision of how it would look with interlocking paths, borders and a wooden gated entrance. The clearing was just a start, a treasure was unearthed in the shape of a set of false teeth and with five ‘gummy’ neighbours nearby, the owner remains a mystery!

Actually, this new mini series will be known as ‘What’s in Colin’s Trug!? And not just any old trug, it is a Thomas Smith Royal Sussex Trug (for those who have no idea what a trug is, myself included, its a garden basket used to carry flowers or produce). Trugs are hand made from sweet chestnut and willow strips of wood. A full insight can be found at sussextrugs.com.

But I digress, back to the plot literally! All of their produce is totally organic as no fertilizers or sprays are being used which is quite an achievement considering there are countless bugs in southern Spain ready to pounce at a hint of a shoot.

Everything is watered by hand as an irrigation system is yet to be installed. To protect the plants a high tech gnome called ‘Arthur’ has been employed, well actually Arthur is pretty low tech but appears more effective than shiny tinsel fluttering in the wind (maybe wind is Arthur’s secret weapon!). Whatever the success is down to, the local Spanish neighbours are highly impressed and have taken a keen interest in the local basket case, offering tips and advice. They themselves produce on a grand scale and it has been a lovely way for Colin and Steve to further integrate into the local community and improve language skills. Colin is pretty fluent so ¿Que hay en tu cesta esta semana, Colin?

And if you are also inspired here’s the planting schedule to get to this stage? 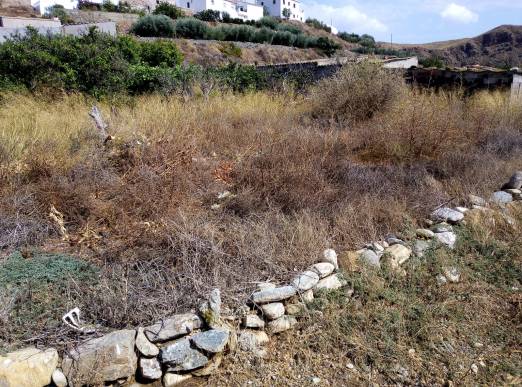 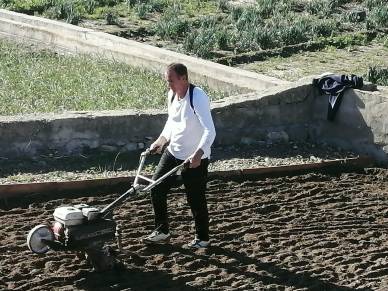 October – fencing put up as protection from the wind 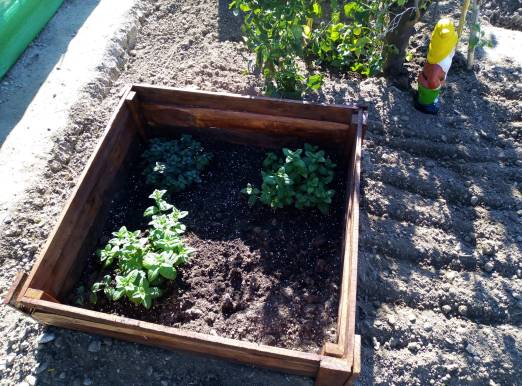 Then more features, a lovely wooden bench (ideal for those mid morning coffee breaks!) and herb planters made from reclaimed wooden pallets. 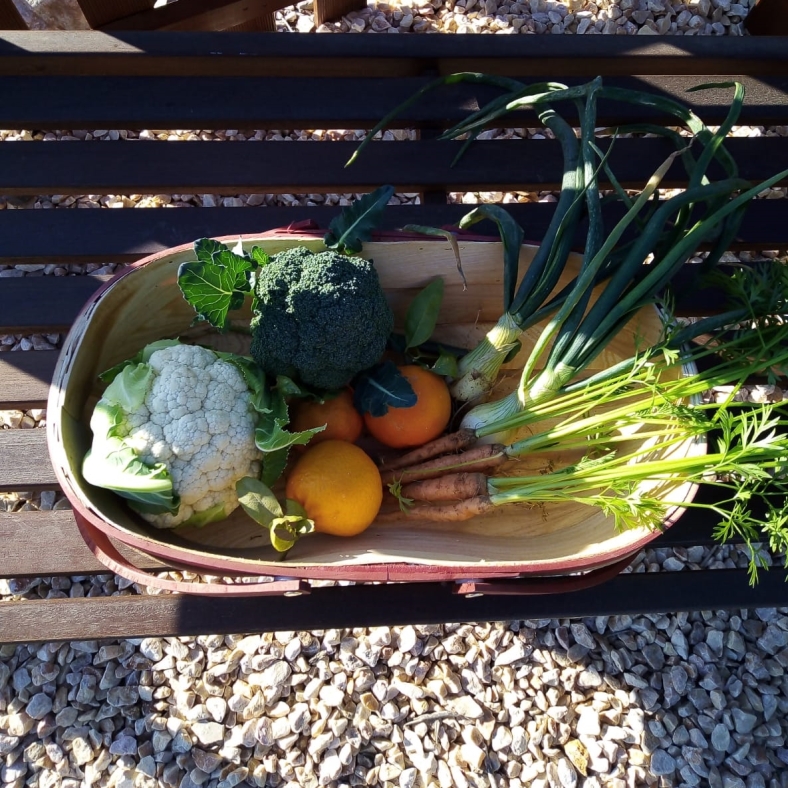 As Colin says, its amazing how quickly everything grows. Lots of work keeping the plot groomed and manicured but looks very impressive! And such a pleasure and the satisfaction is immense. 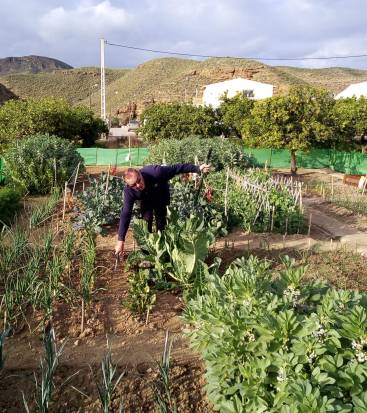 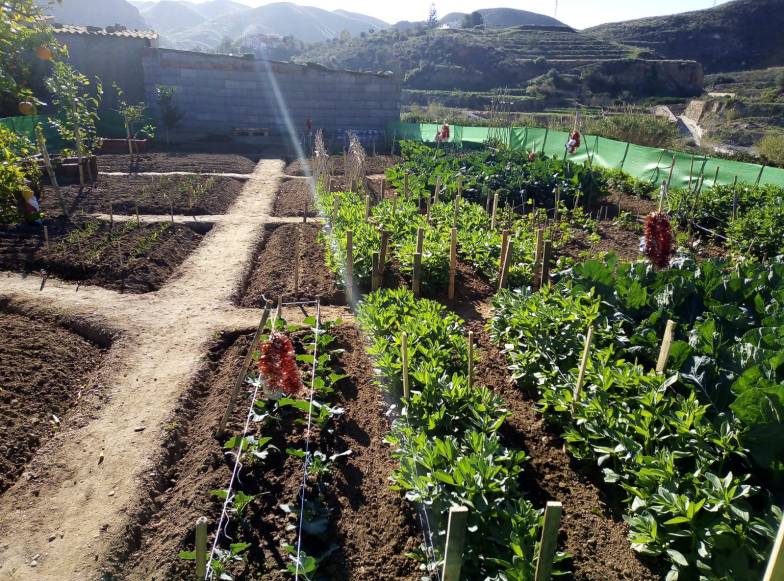 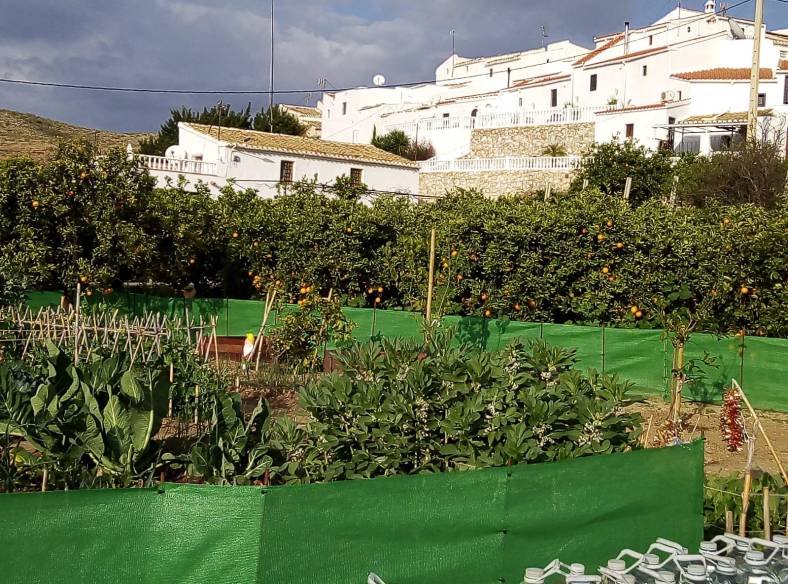 Colin and Steve’s house is the backdrop to this project!

What is happening next Colin? “Well, plot 2 cleared and propagated ….. so watch this space …..”

3 thoughts on “The Basket Case in Jauro”